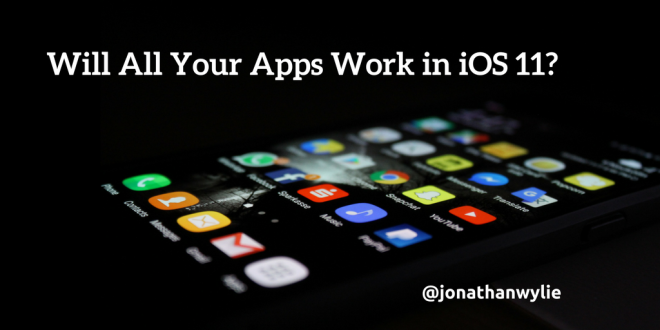 When Apple launches iOS 11 this Fall, they are ending support for 32-bit apps. This means that there could be some apps on your iPhone or iPad that won’t work unless they are updated to run as a 64-bit application. Some of these apps will be updated by developers, others will not, but you can plan ahead by seeing which ones are compatible and which ones are not. So, here’s a quick way for you to find apps that won’t work when you decide to upgrade to iOS 11.

How to Find Unsupported Apps in iOS 11

If nothing happens, when you tap Applications, then the apps that are on your device will work just fine in iOS 11. However, if you see a list of apps, (like in the screenshot below), then these are the apps that will not work when you upgrade to iOS 11.

What Happens to 32-bit Apps?

The developers who make these apps have two choices. They can update them to run on iOS 11, or they can leave them as they are with the knowledge that they will only be able to be used on devices running iOS 10 and earlier.

The two apps on my iPad are Google apps. The first is YouTube Capture. It is a light-weight video capture app that has some basic editing features built-in for creating videos you can quickly upload to YouTube. I will sometimes use this in video workshops with teachers as a quick and easy way to record multiple clips, trim video, add music and share on YouTube. One of my favorite features is that it won’t let you record vertical video! Will Google update this app? They might, but they may just incorporate these features into a updated version of the YouTube app. Time will tell.

My other Google app is Google Earth. I’m less confident that this app will get an update, especially when you consider the recent launch of the new web based version of Google Earth. The online version does not currently work on iPhones and iPads, but iOS support is coming “in the near future”, so my guess is that this app won’t get any future updates as a result of that commitment.

So, you know the apps that won’t work when you upgrade to iOS 11, but do you know which devices will work? The screenshot below details the devices that Apple says will be able to upgrade to iOS 11. Of course, it’s no coincidence that all these devices have a 64-bit CPU.

Do you have 32-bit apps on your iOS devices? Which ones are they, and do you think they will receive an update for iOS 11?