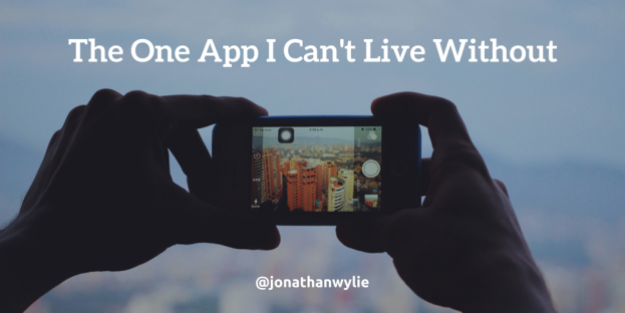 Recently, at the #iPadU conference, I was challenged to think about the one app I couldn’t live without. This was harder than I thought it might be. I mean, there are a lot of apps I really like, but are there any that I couldn’t live without, or at least be able to find some kind of passable replacement for? After some consideration, I decided that there was such an app, and that it really was quite unique in what it offers students, teachers and just about everyone else. That app, is the Camera app.

In many ways it is more than just an app, because it is now an essential hardware feature, but many people forget that when the iPad was first introduced in April 2010, there was no camera. Even today, there are those that still laud the introduction of the original iPad as a new era for computing, but for me, the iPad 2 was far more important than the one that came before it. When the iPad 2 was announced a year later, it had a two cameras – one on the front and one on the back.  The addition of these cameras opened up a whole new world for what was actually possible with an iPad, and quickly turned this mobile tablet from a consumption device to a creation device. It transformed the iPad into something infinitely more appealing and opened the doors for developers to create some amazing apps.

In the years that followed, the camera(s) improved in functionality and quality. On the latest iPad Pro, the stock camera app allows you to take 12 megapixel photos, 4k video, huge panoramas, time lapse videos, and slow motion movies at up to 240fps. There is a timer mode, Auto HDR, face detection, burst mode, exposure control and geotagging. Yet, in many ways, all this technology is just the tip of the iceberg because of the way that iOS allows other apps to access the camera and the photos and videos that you capture with it.

Today, you can make green screen movies on your iPad with no difficulties at all. You can edit videos in a full featured video editor. You can create multimedia eBooks with Book Creator or create your own comic book with Halftone 2 and ComicBook! Be amazed as you build multimedia slideshows with Shadow Puppet or 30 Hands, and create stop motion movies with iMotion HD. Capture learning as it happens with SeeSaw. Tell the story of your school on social media by sharing photos and videos on Twitter, Facebook & Instagram. Point your camera at AR targets to add unparalleled levels of interactivity with the help of Aurasma or DAQRI. Transform your photos into shareworthy images with graphic design apps for the iPad, create collages with PicCollage Kids, or make amazing photo slideshows with Quik & Animoto.

This is by no means an exhaustive list, nor was it meant to be. These are just a fraction of the activities that educators use the camera for in schools today, but as a whole they serve to underline the vital importance of this unsung iPad app. Sometimes we take it for granted, or forget that it is there, but I am in no doubt whatsoever that the only app I couldn’t live without is the camera app.

3 thoughts on “The One App I Can’t Live Without”